Between 2012 and 2017, the demand for data scientists has increased by a whopping 650%. Why is data science such a hot topic? There are multiple factors at play:

What is a data scientist?

The term data scientist was first coined in a paper published by William S. Cleveland in 2001. In his publication, Cleveland argues for the extension of statistics into other areas such as multidisciplinary projects, data modeling, and computing. In my opinion, data science is best understood as an interdisciplinary discipline unifying all skills that are useful for processing, analyzing, and interpreting data. According to online job platforms, the most relevant data science skills are the following:

Since data scientists need to have a diverse set of skills, there are few people who excel in all of these areas. These people are called unicorns to foreshadow their rarity.

What is my relation to data science?

To be honest, I am not a data scientist by training. I hold a Bachelor’s and a Master’s degree in bioinformatics, so I never took part in a data science curriculum. However, I still consider myself a data scientist because the work I am currently doing is highly focused on analyzing data using machine learning and statistics.

The benefit of labeling oneself as a data scientist is that one is not limited to a specific field. For example, although I am currently applying data science on biological data, I could use similar techniques on completely different types of data. Due to the ubiquity of data science throughout all quantitative fields, data scientists have diverse backgrounds such as computer science, physics, or mathematics.

In 2009 a friend and I created bloxxo, a German blog that offered tips and tricks on how to be a successful blogger. We were very motivated and had ambitious goals. Although we successfully formed a close-knit community and reached a page rank of 4 after only a few months, we could not hold up the pace. Writing at least 2 posts every day just required too much time and effort. Besides, both of us were working on our Bachelor’s degrees at that time, so free time was a luxury. Thus, we had to discontinue the blog.

My return to blogging has two sources of motivation. The first one is time. Since I plan to wrap up my PhD soon, I should have more spare time for blogging. The second is my desire to give something back to the community. When I was researching answers to practical coding questions related to my work, this was often gruesome. Although it is easy to find some explanations including code snippets, these solutions are often not easily understood and may not actually work as described. So, my goal was to provide a resource providing well-written, well-structured, and accurate information.

My experience with R and blogdown

I began using R when I got into machine learning in 2011; I have been a fan ever since. In the meantime, I have even developed two R packages, which are available via Bioconductor (openPrimeR and openPrimeRui). Thus, when I thought about creating a blog about data science, it was clear to me that I had to use R as a programming language. 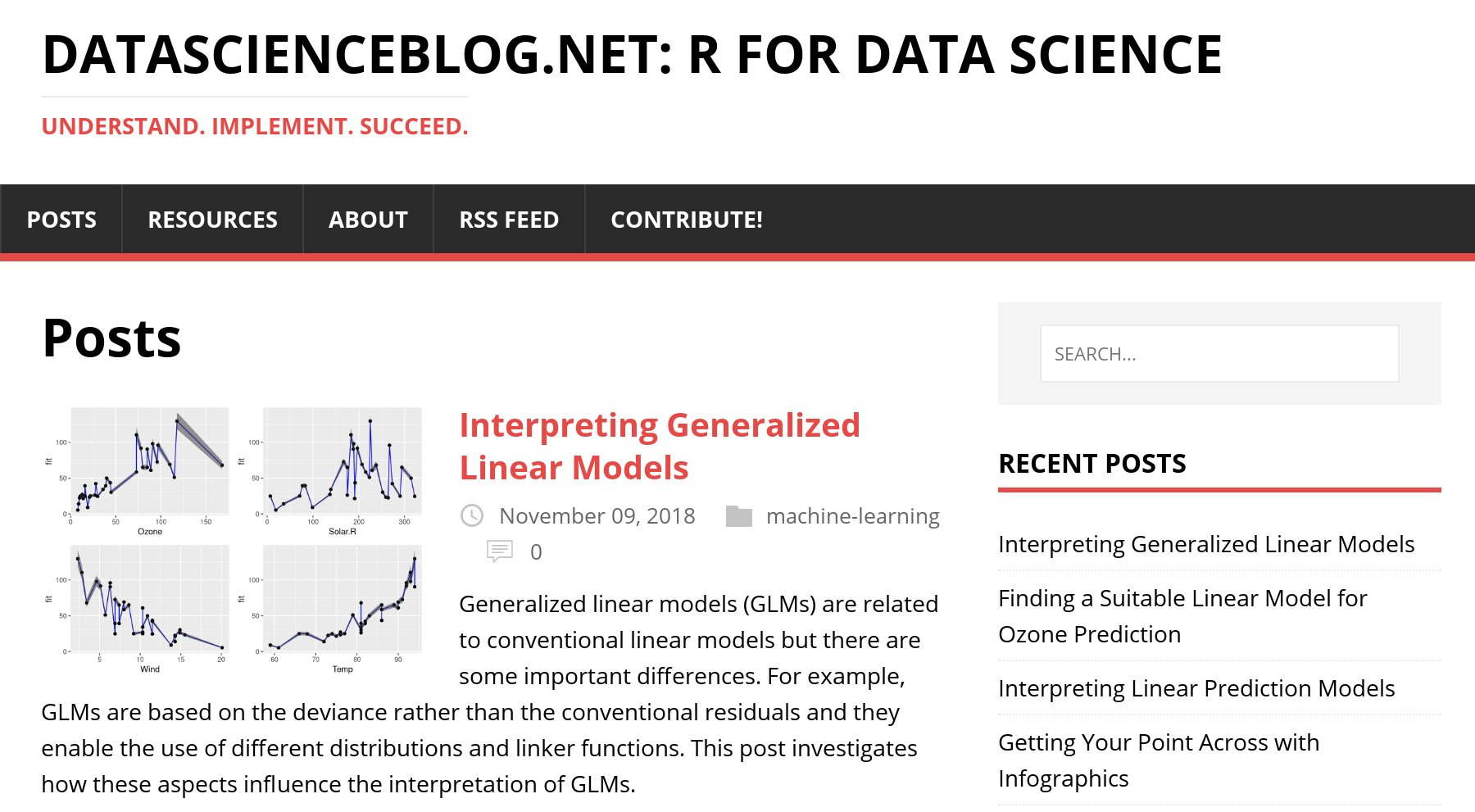 The idea behind my blog on data science was to focus on applications of data science in R, covering areas such as statistics, data visualization, and machine learning. One of my goals was to make all blog posts reproducible by integrating R code into the posts. After some research, I stumbled upon the blogdown package. At first I was skeptical because I did not believe that it would be that easy to create a website using the package but it turned out that my skepticism was unfounded.

After spending several hours investigating different Hugo templates, I decided to use the Mainroad theme because it resembles the content-driven templates from WordPress, which is why I think that Mainroad is ideally suited for a blog.

The Achilles’ heel of static websites is that these sites lack potential for interaction. Therefore, to integrate a commenting system into my blog, I included Disqus. However, I was never really happy with that decision for two reasons:

So, I searched for alternatives to Disqus and stumbled upon Staticman, which brings user-generated content to static websites. So, I set up my own instance of Staticman, which I am currently successfully using to run the commenting system of my blog. If you would like to see the system in action, just click on the previous link.

Since my blog deals with a lot of R code, I wanted to make the code easily retrievable. Therefore, each post provides two buttons, which provide the following functions:

Both functions are implemented through a custom partial template that is included when viewing individual posts. More specifically, the first function simply entails constructing a path to GitHub that is based on the current file’s path. For the second function, I implemented the following JavaScript function:

My goal is to establish my blog as a useful resource for R and data science. Besides frequently writing high-quality posts, I plan to do more work in the following areas:

Coming to the end of this article, I would like to thank the rbind project for the terrific idea of connecting all R bloggers. I am excited about the future of static blogging and I am looking forward to learn more by sifting through all of the blogs that are united through rbind.